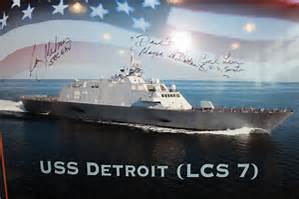 Join host Jim Fausone this week on Veterans Radio and his guests.

With the commissioning of the USS Detroit this week in Detroit Jim talks with CDR Michael Desmond, the Commanding Officer of the USS Detroit, a Littoral Combat Ship (LCS), tells us about the 6th navy ship to be named after Detroit and the capabilities of these fast, small , flexible new war fighting ships.

And Chris Morse who served in the Navy and Army and was medically retired as a Major. He discusses how the Army after 17 years of service took care of him when he received a cancer diagnosis, subsequent VA experiences and his running for office.