This week’s host is Dale Throneberry. His guest is Dr. Bryan Rigg, author of “Flamethrower”. 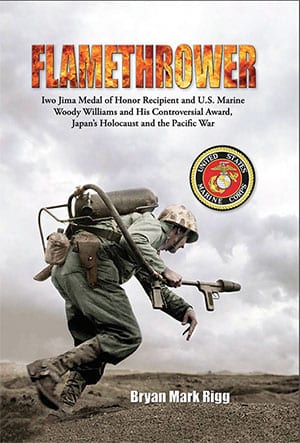 Accomplished military historian, Bryan Mark Rigg, reconstructs Woody Williams’s remarkable story, from his youth on a dairy farm in West Virginia to his experiences as a Marine on Guadalcanal, on Guam and on Iwo Jima.

Rigg tells Williams’ story vividly, and objectively, and places it in the context of the broader Pacific theater of World War II. Using never-before-seen documents and interviews, Rigg brings out new information about the Pacific War unknown until now. As he explores Woody’s life, Rigg enables the reader to better appreciate the brave Marines and their heroics. Moreover, Rigg explores the numerous problems with Woody and his narrative. As a result, this book also documents Woody’s controversial Medal of Honor process, one of the most controversial Medal of Honor stories to come out of World War II.